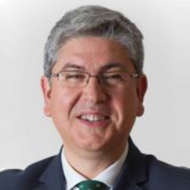 Started at Telefonica Sistemas in 1989 as TTC systems expert until 1991. At Hispasat, from 1991 up today, he has developed his career from satellite engineer through different management responsibilities. Since 2003 he was the Chief Technical Officer of HISPASAT, being responsible of the definition and implementation of satellite systems, launchers, control centers and ground stations as well as their operation and control, in line with the strategic goals of HISPASAT. In 2011, he has been appointed Chief Technical and Operating Officer, adding to his previous assignments the operations of the Communications Control Center and the Broadband Control Center. In March 2009, he was appointed as Vice-President of the Spanish Association for Space Industries (Proespacio) until June 2010. AIAA Senior Member. IEEE Senior Member